Clairmont’s evolution put on the table 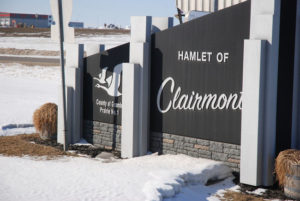 Growth and the many building opportunities within the Hamlet of Clairmont were the topics of the Home Builder’s Breakfast: A Vision for Clairmont, held at the County of Grande Prairie Sportsplex on Thursday.

Al Rempel president of Westshield Development Ltd, said the event was held in order to discuss the Northfield Landing development in Clairmont as well as give the county a chance to explain their vision for that area and some of the other growth plans moving forward.

“I think people need to understand what the future holds for the area and why would you want to build there and more importantly, why would people want to live there and what the demand is,” he said.

Chris King, an economic development officer for the county, gave a presentation focused on the potential for those who take advantage of the county’s low vacancy rate to build developments similar to Northfield Landing. King said the low vacancy rate and the high demand for labour are two key factors that will allow for more residential growth.

“Currently, we’re seeing rental vacancy rates in the low 1% range, 1.3% I believe is the latest number. That’s a landlord’s dream but it’s certainly not good for growth of the region,” said King.

“We’d like to see that number get a little closer to 5% so certainly there’s a large opportunity for growth and we’re seeing a lot of people that currently are renting and are wanting to buy but just can’t. What is available for sale is selling within days so there’s very high demand right now.”

King said part of his presentation focused on encouraging builders to take a look at the county hamlets such as Clairmont to begin building, if they haven’t already, to encourage not only families but businesses to set up shop in those areas.

“As we continue to see further growth in the greater Peace region, I think we’re going to see bigger opportunities for more service companies, more industry, more manufacturing and certainly a lot more commercial and retail development and those commercial services that we don’t often think of, lawyers, doctors, dentists,” he said.

Part of the reason for King’s presentation, he said, was to ensure builders that there are plenty of opportunities to build within the county, and be assured that the prospective opportunities were not all “smoke and mirrors” he said.

The message behind the presentation really hit home with Brad White of Imagine Built Homes and his co-workers. White said the company had been hoping to build in Clairmont but only if a downtown core was in the works.

He said the presentation on the county’s vision for the hamlet also gave builders an idea of what the county has planned in order to attract people to settle in the region, something most builder’s want to know before committing to a project.

“We were already pretty familiar with what was going to happen economically in the region but to hear about what they were planning as far as the downtown core, that was really what was encouraging about it,” he said. “And Clairmont needs it. If Clairmont is going to grow, it can’t grow on just industrial, it needs a place… for people to buy groceries and go for a meal and go see a movie… if they want people to come and live here.”